Lex Gillette is a high impact speaker who has spoken to a wide range of audiences, both domestically and abroad. His clients include Fortune 500 companies, professional sports teams, nonprofit organizations, Universities and colleges.

His messages are forward-focused and goal centered, inspiring his audiences to imagine the possibilities and achieve their potential. As a globally recognized Paralympic athlete and talented singer, he has a unique perspective on what it takes to be successful.

When he is not winning medals, Lex is inspiring others with his personal stories of triumph over adversity. With an attitude of discovery and understanding, Lex listens to the goals for your event and will craft a message that will meet your organization’s needs.

Vision is an essential element in accomplishing success, and Lex will work with you to create a presentation that is sure to help you and your organization realize your own unique vision. 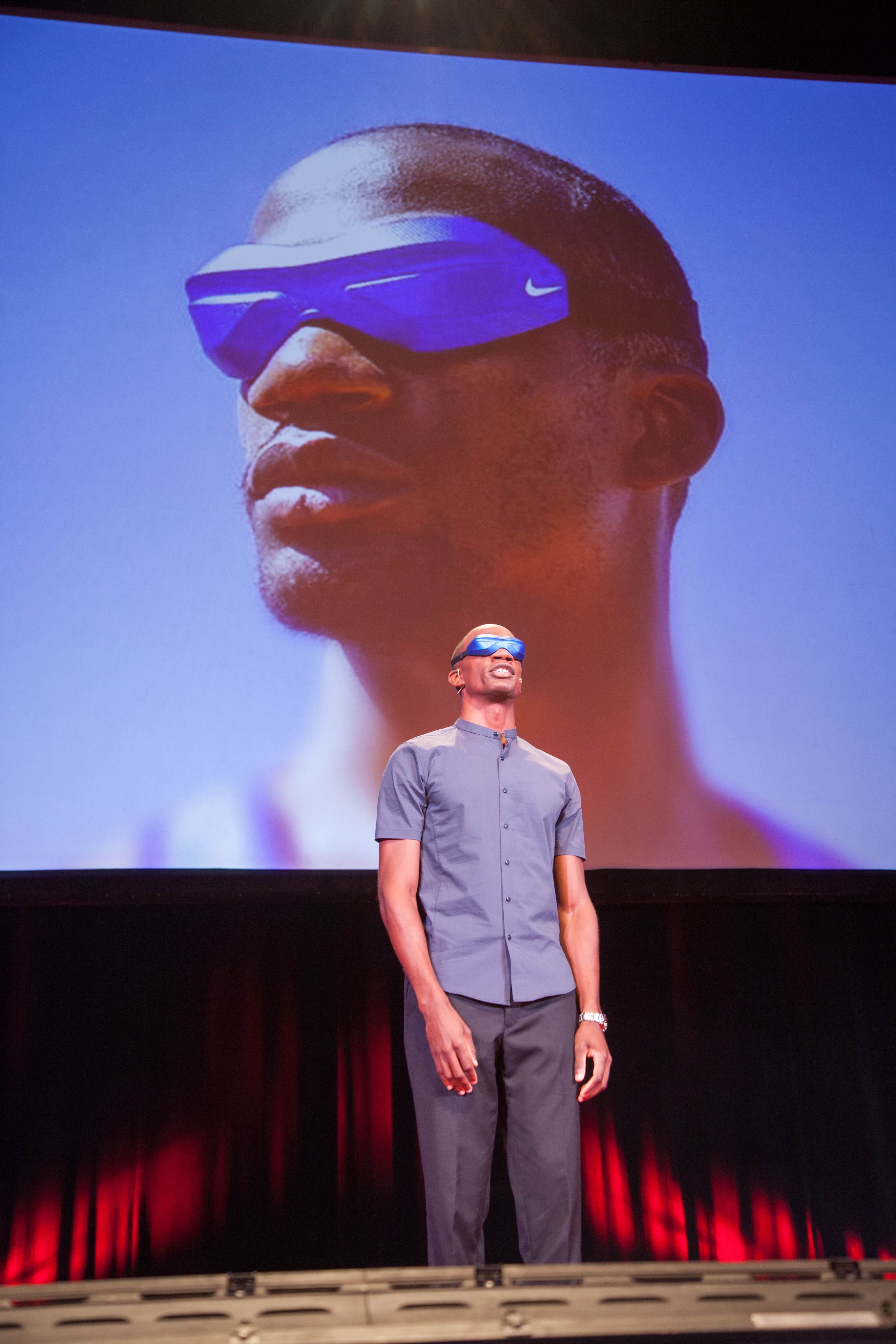 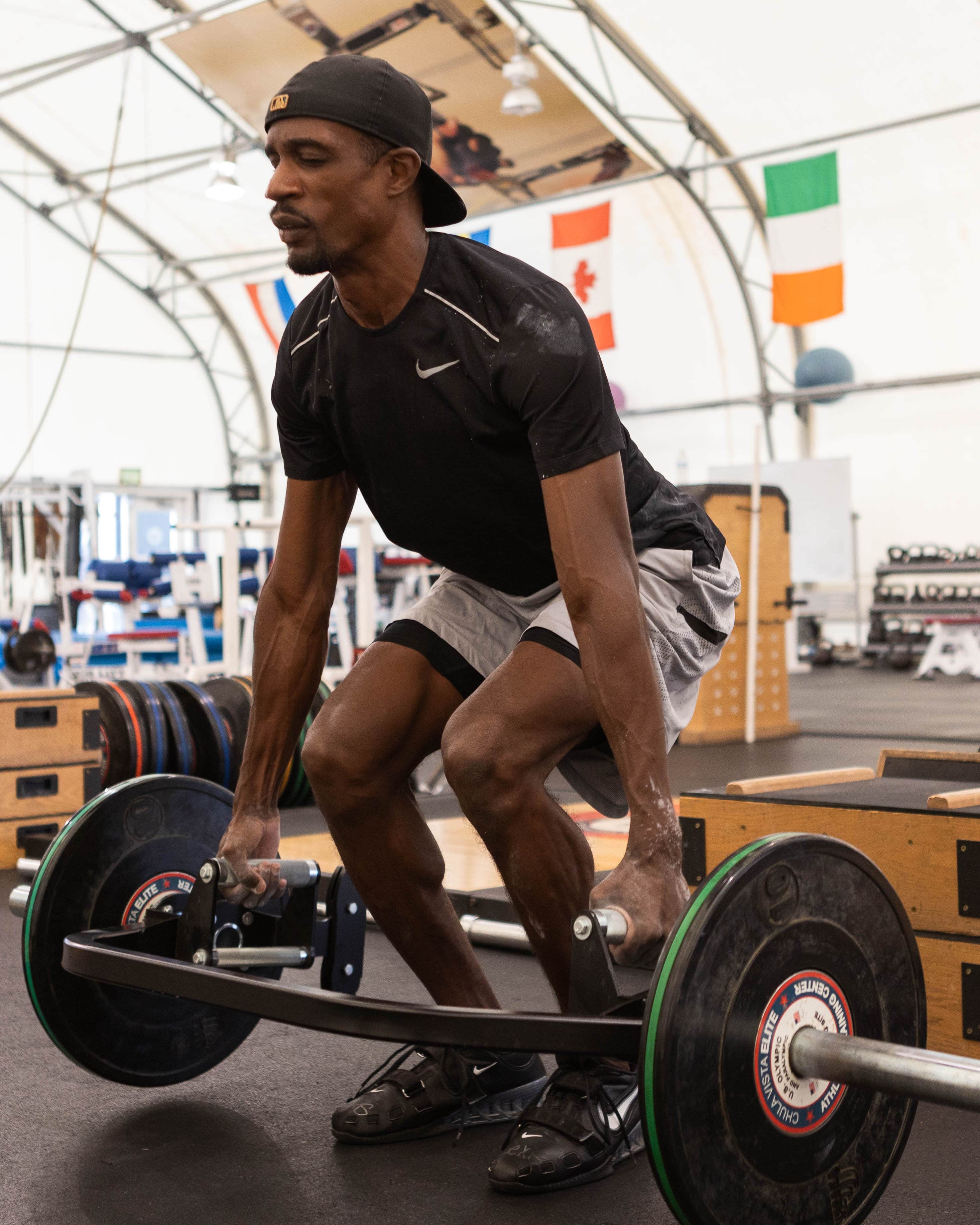 [Lex standing on a stage in front of an audience.]

When I was a kid I purchased a basketball realm designed for the top of a closet door. I took a safety pin and tied the bottom of the net together so that a successful basket would mean the ball would stay inside of the net and not fall through to the ground.

Now, in the beginning, I was absolutely terrible at making baskets especially since I had no eyesight. As I began to envision where the room was, the ball began to go in. It eventually got to the point where I could stand anywhere  in my room and drain the shot. What I realized is that sometimes in life we're afraid to take that shot in the dark.

Envisioning where that rim was helped me sharpen my focus tremendously - a razor-sharp focus is what helped propel me to a gold on the global stage at the 2015 World Championships in Doha Qatar on the morning of October 28.

I honed in on the sound of his voice and took off in his direction. On my sixteenth stride, I left and soared through the air. Thousands and thousands of cheers echoed throughout the stadium and soon after, I realized my flight would be making a successful landing in the gold medal position on the medal stand.

Triumphs like the one you just heard, result from taking shots in the dark. Now, let me ask you this.

[Image of a track with the words “sight” and “vision”]

Are people born with this raging determination to succeed? Does this attitude come from facing hardships? Do we have to lose our sight in order to see a better version of ourselves, the best view of ourselves?  If I had sight, would I still have this relentless attitude or is this just a classic case of blind determination?

So what I have in my hand right here is a blindfold that I'm required to wear in the Paralympic competition.

(Lex puts on his blindfold)

This is actually the blindfold that Nike designed specifically for me a few months ago in the lead-up to the 2016 Paralympics. If you're wondering, all athletes in my classification are required to wear a blindfold to ensure there's a level playing field. I wore this one while competing in long jump last month. Just as a sidebar, whenever I wear these people say I look like Frozone from the Incredibles and if that's so, “Honey where's my super suit?”

I can't see anything through these and although it hasn't always been this way, this is how I live my life every single day. So would you mind living in my skin for just a minute?

I want you to close your eyes and imagine your highest potential. What does that look like? What would you be doing with your true potential now? For me, it doesn't really matter if I have my eyes open or closed, but I imagine myself running, jumping, flying.

(Lex runs and jumps in place)

I imagine myself competing in front of thousands and thousands of spectators around the world standing on top of the medal stand with the American flag raised high, winning gold, silver, and bronze medals.

I imagine myself flying as far as my mind would carry me. My high school teacher saw this vision and he helped me see it within myself. So imagine a blank slate. Now paint a picture of you at your absolute best. Months ago, I saw two thousand people walking into Symphony Hall and I saw two thousand people leaving as new artists in the world, ready to paint the pictures that they want to see.  Now open your eyes.

One thing that I figured out is that some people are unable to distinguish between sight and  vision.  Sight shows us what is envision shows us what can be sight reveals to us our current reality and vision allows us to see past our reality. Vision gives us the ability to see where we want to go and who we want to be. There's a lot of people out there who have perfect sight but they don't have 20/20 vision.

Let me give you an example if when I refused to allow sight to overpower my vision. I refused to accept the current reality because I had a different vision for the future.

Last month in Rio, I was on the brink of elimination.  At one point, I had one jump remaining and if I didn't land in the top eight, I wouldn't be allowed to move on to the final round so I stood on the track in front of thousands and thousands of rowdy spectators knowing that I had a ridiculously difficult task in front of me but I did not travel all that way to come back to San Diego empty-handed. I could not allow that to happen. I didn't see it that way, so I slid my blindfold down. I focused and locked in on the one thing that mattered most. I ran, I jumped and flew through the air.

(Lex runs and jumps in place)

When I landed, I realized that I would be making another appearance on the podium as I had secured my fourth Paralympic silver medal.

Once I lost my sight, I saw the possibilities.

When I was eight my sight began to vanish before my very eyes and it was that absolute biggest blessing because now I wasn't imprisoned by what is. I gained freedom and seeing a vision of what could be. Had I accepted at eight years old that blindness would be the end of my story, I would have never achieved four Paralympic medals two World Championships, a world record, and 17 national championships. Vision has allowed me to be the only totally blind athlete to this day to ever soar over 22 feet in the long jump.

When I was eight years old, I could see very well but I began to have retina detachments.

[Image of the words “possibilities” and “shot in the dark”]

I've had 13 operations on my eyes, of which 10 occurred in one year. After the last one, doctors said there was nothing else they could do to help and they said I would eventually lose my sight. From that day forward, I would go home, fall asleep and wake up the next morning only to see a little less than what I did the day before it until the day arrived when I woke up and I couldn't see anything. I was faced with the choice. I could either accept the current reality or I could take a shot in the dark. Now it didn't take me long to see that you're all in the dark also, but enough of the blind jokes.

[Image of a Lex with words “blindness was my beginning”]

Lex is available for... 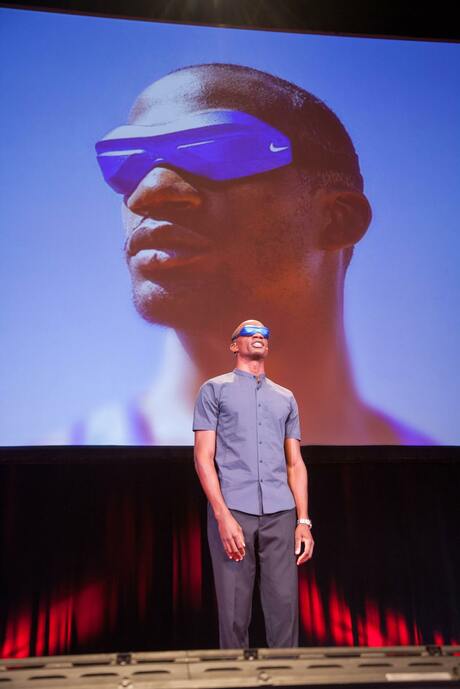 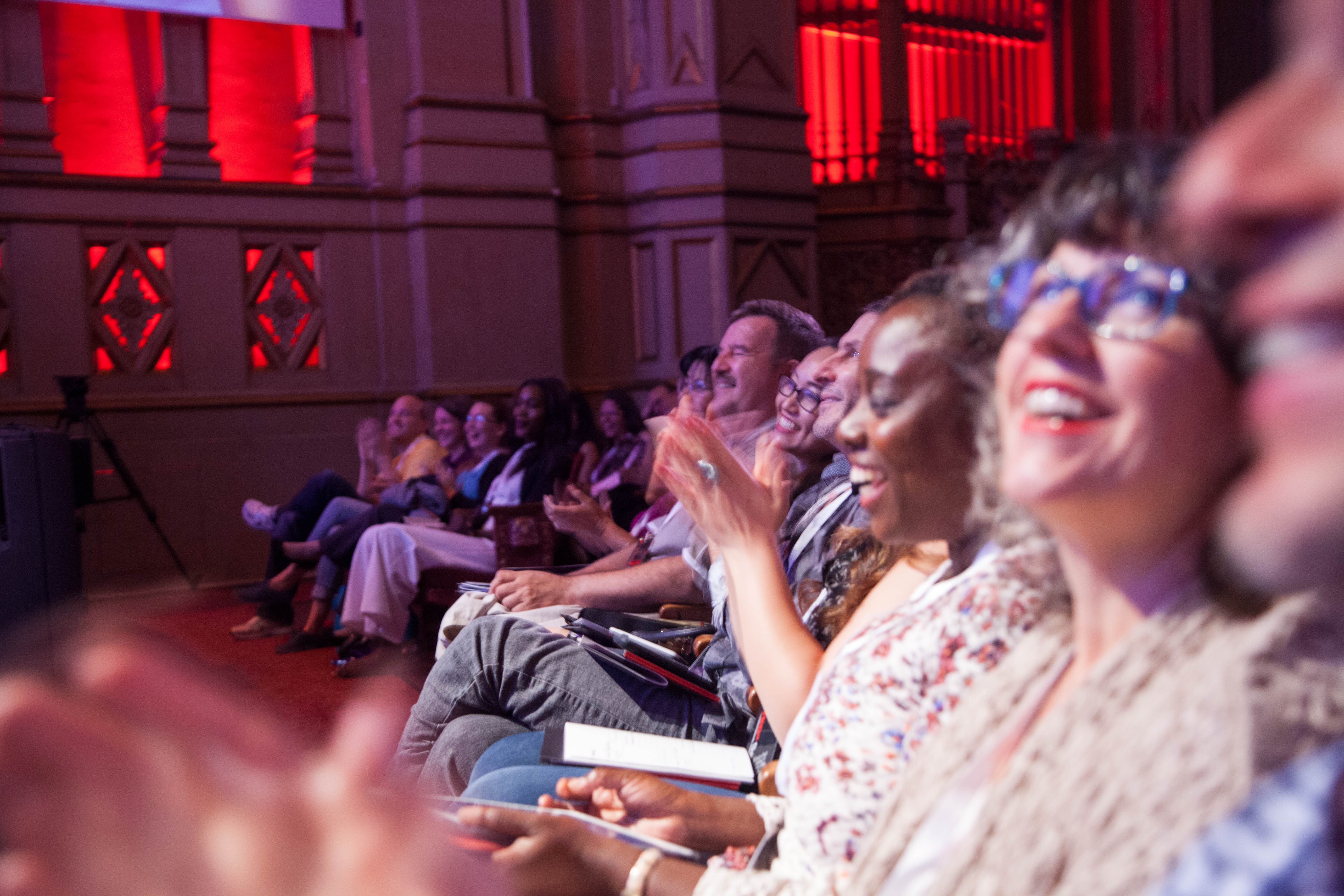 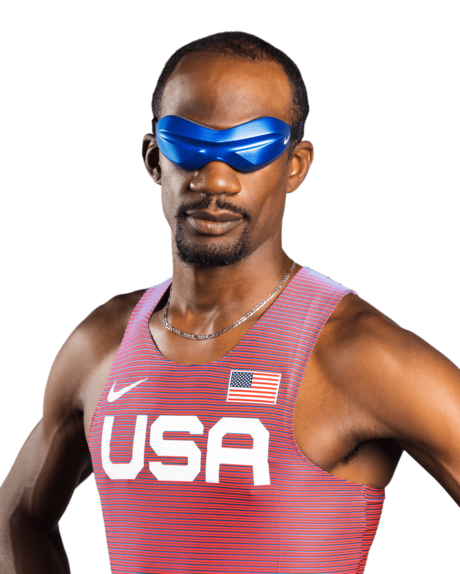 Contact Lex today to start tapping into your inner potential, and achieve your goals as an individual and a group. He proudly serves audiences throughout the nation, and beyond.

See what these companies have to say about Lex.

Lex is a highly sought-after inspirational keynote speaker who empowers his audiences to gaze beyond the horizon and see more than what is in front of their eyes. There is no need for sight when you have a vision®.

Lex’s presentation will make you laugh and cry, but most of all, you will be equipped with useful skills and insights, and you will be inspired to become a better version of yourself.

In addition to his in-person presentations, Lex has developed a robust virtual program as corporations have shifted from in-person to online delivery.  He continues to deliver engaging, positive, and powerful content to his audience, tailored specifically to the needs of each organization.

Lex provides a variety of program options, including, but not limited to the following:

Lex’s signature presentations have inspired audiences around the nation, including his most requested speeches, which include:

Remove the Blindfold: Lex explores the idea of blindfolds, how they appear in our lives and amongst our teams, and what we can do to remove them to see the world with more clarity and truth.

No Need For Sight When You Have a Vision®: Lex explores the importance of vision, how it plays a critical role in our ability to break down barriers and accomplish our biggest goals, and how the presence of a vision establishes a framework for endless potential and achievement.

Connection is the New Currency: We will traverse through the 13-year relationship between Lex and his guide Wesley Williams, and how a real and authentic connection has helped propel Lex to dominance on the global stage. You will leave this session with a firm understanding of the power skills needed to build and maintain real connection, and how that connection helps drive teams  to dominance in the arena of life that matters most to them.

**Due to the current pandemic, in-person experiential learning events are on hold until further notice.

As a blind Paralympic athlete, Lex is one of few can who offer an experiential learning experience like his. He has designed unique experiences for corporate leaders and teams through immersive hands-on events in unforgettable locations. The purpose is to improve the leadership capability of individuals, teams, and organizations and propel them to higher levels of success, performance, and growth.

Lex has represented many global brands with dignity through powerful, mutually beneficial relationships. As a brand ambassador for your organization, Lex helps achieve your company’s most important goals and objectives.

Lex will represent your brand in a variety of ways, including, but not limited to the following:

When appropriate, Lex will wear apparel that prominently includes company name and logo artwork as provided or approved by the company. All of the services above can be customized to fit the needs of your company.